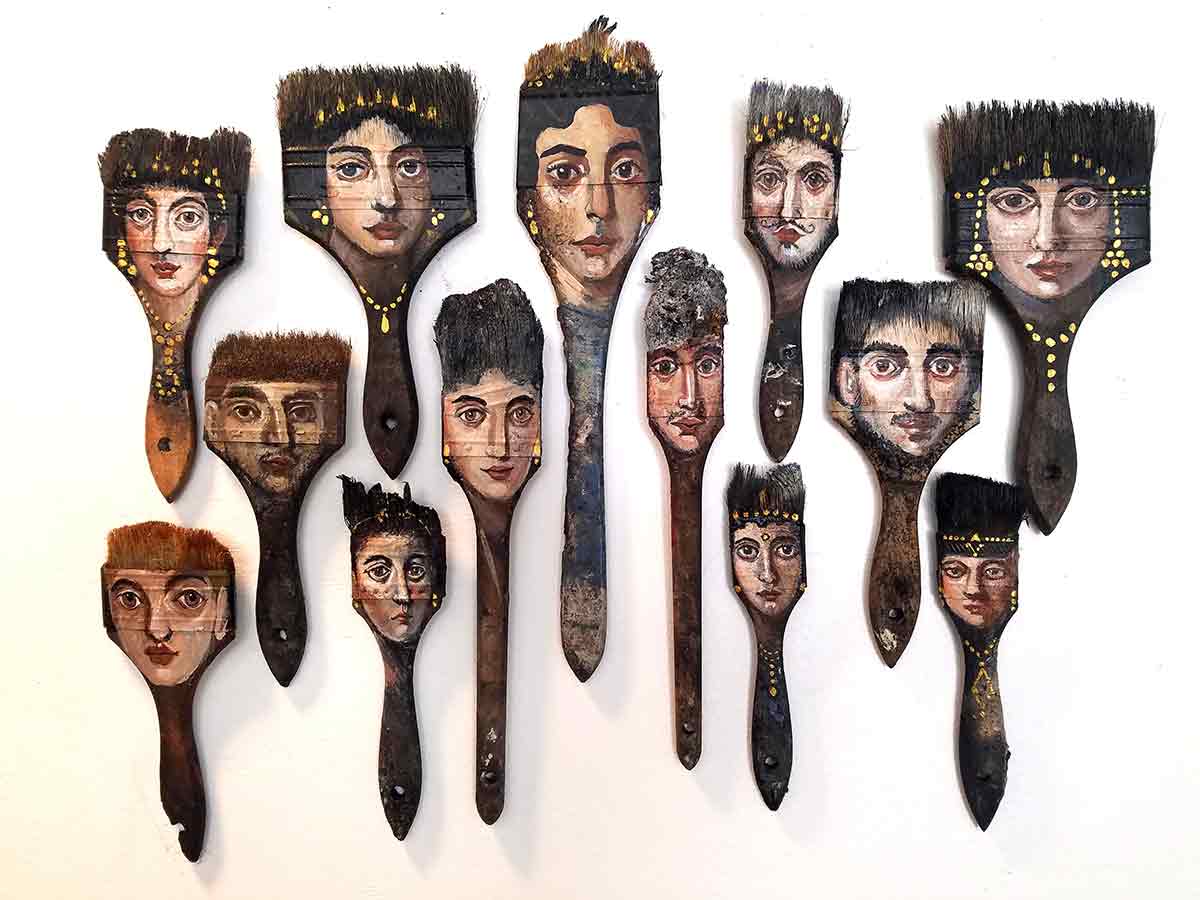 This post originally published January 28, 2017. Since then, it has been updated.

This time last year, Flavio Bisciotti was cleaning up the remains from a fire that burned down his home art-studio in Venice. The loss included his personal paintings, photographs and ephemera, furniture, objects, tools, materials, clothing, files, and things he had collected over his lifespan. When Flavio recovered from the initial shock, he spoke with his friends and the idea to create art from what he could salvage was conceived.

Alexander Dillon told TribeLA Magazine that she took the burned brushed home, and at first, she didn’t know what to do with them. She played with them turning them back and forth … then she began to paint and stories evolved. With all of her brushes, “They show up and tell me who they are,” she says. Working on each piece over the course of several days, she finds the emotion and personality of her characters. The results are beautiful and engaging faces, often reminiscent of Roman-Egyptian mummy portraits or Baroque painting. “I’m influenced by the art of every era”, she says.

#PALIMPSESTVenice (something reused or altered but still bearing visible traces of its earlier form), is an appropriate name for an exhibition that not only brings creativity from the loss-damage but also a collaboration with local artist and the community. Since Flavio (chief creative officer of FAB-gallery in Santa Monica) has curated art exhibits in the past that involved local artists, the participants were not only able to make art from the ruins, the project also strengthened their relationship with each other.

Below is a list of participating artist in #PalimpsestVenice: (more about them in upcoming issues of TribeLA Magazine)

You can view “Art from the Ashes” at FAB-gallery, 2001 Main Street in Santa Monica. For more information go to: http://palimpsest-venice.com.

Flavio Bisciotti is a multi-faceted individual with several deep areas of interest. This includes his artwork, and also his company Bisciotti Design + Build, and his championing of artists through his art gallery, FAB-gallery in Santa Monica.