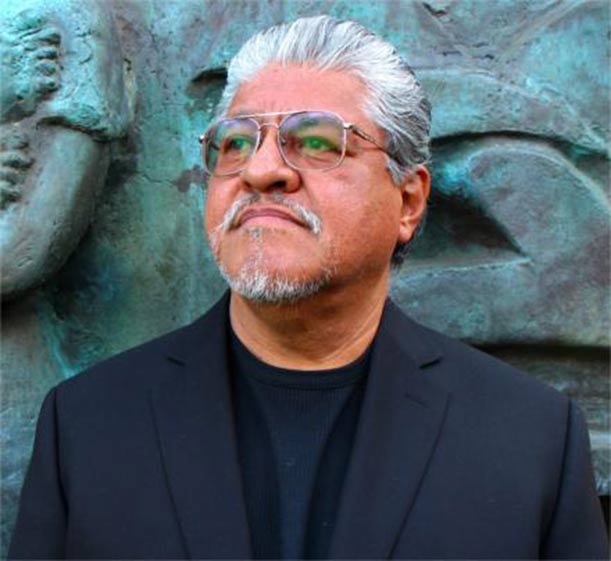 [hoot_dropcap]I finished my term as Los Angeles Poet Laureate at the end of 2016.[/hoot_dropcap] In two years, I spoke or read poetry to an estimated 25,000 people in over 200 events, and millions more in English and Spanish language TV, radio, publication, and Internet media. My press, Tia Chucha Press, released the largest poetry anthology of L.A.-area poets called “Coiled Serpents: Poets Arising from the Cultural Quakes & Shifts of Los Angeles,” edited by Neelanjana Banerjee, Daniel A. Olivas, and Ruben J. Rodriguez. 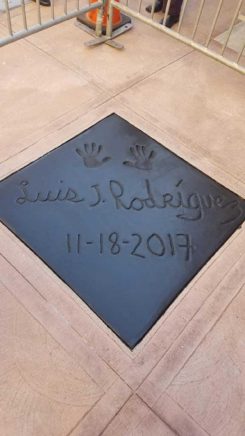 One of the poems I wrote for the city, “Love Poem to Los Angeles,” was read on KPPC-FM and published in Rattle magazine. Filmmaker John F. Cantu also did a great short video of this poem with music by Quetzal Flores, accessible here.

Graffiti Verite’s Bob Bryan created a unique, wonderful documentary film of me as poet laureate. Click here for more info and how to order.

My previous poetry books from Curbstone Press were also republished (“The Concrete River,” “Trochemoche,” “My Nature is Hunger”) and a new book appeared during my tenure called, “Borrowed Bones.” Here’s how you can order the latest book: http://www.nupress.northwestern.edu/content/borrowed-bones.

Then in early 2017, I became a script consultant for the FX TV show “Snowfall,” co-created by John Singleton. I helped shape major parts of the show, which after 10 episodes has been picked up for another season, and I’m back on the team.

Also, in October 2016, I restarted my creative writing classes at Lancaster Prison, which I began ten years ago. I now have two maximum-security yards (Level 4) where I’ve now taught three 13 to 15 week classes. I also got to visit Los Padrinos Juvenile Hall with my son Ramiro, who was given special permission since he did 15 years in Illinois prisons. He was a hit among the young people, male and female. Earlier this year, Ramiro joined me in talks to two healing circles of the Guiding Rage Into Power (GRIP) program in San Quentin Prison (again, with special permission of the warden). Ramiro is becoming a powerful speaker, storyteller, and poet.

In addition, I finished a new book—my 16th—that I turned in to my literary agent two weeks ago at the Sandra Dijkstra Agency. They will be searching for the best publisher, and then perhaps more changes are in store. For now I’ve done 13 essays, personal as well as political, including arguments against Trump’s America, but moreover a vision for a new America informed by indigenous cosmology and revolutionary thought and strategies of the past 200 years. I can’t say anymore, but I’m excited for what will happen. Title pending. For more on my thoughts based on my blog go to www.luisjrodriguez.com.

My wife Trini and I also continue our healing/recovering work with the sweat lodge and healing circles. This coming year I will be celebrating 25 years sobriety, 25 years since the publication of “Always Running” (more to come about this, including major events planned), and 30 years of marriage to the most wonderful, loving, and beautiful partner. We have four children, five grandchildren, and three grand-grandchildren. Again, we will plan various things in 2018 to commemorate all this. Meantime, you can listen to the podcast Trini and I started about two years ago called “The Hummingbird Cricket Hour” on SoundCloud and iTunes. Here are our latest podcasts on SoundCloud.

In addition, you should know that my wife Trini was featured in a special KCET TV presentation on December 5th called “Telling L.A.: The Search for Home.” Click here to view the program.

I also did a podcast for “The Soul of California” with Richard Doan that you can link here: http://thesoulofcalifornia.libsyn.com/luis-rodriguez-angry-at-injustice-hungry-for-change. 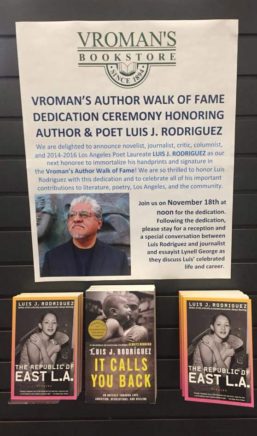 One amazing event—on top of so many—was being honored with a handprint and signature on cement in front of Pasadena’s Vroman’s Bookstore for their “Walk of Fame.” This occurred on November 18, 2017. African American Los Angeles journalist Lynell George afterwards held a dialogue with me that one of the best I’ve ever had, punctuated with cake.

Also here are our Tia Chucha Press books of 2017. These are “The Wandering Song: Central American Writing of the United States,” edited by Leticia Hernandez Linares, Ruben Martinez, and Hector Tobar—the first literary anthology of Central American writers of the diaspora every published. Also “From Trouble to Triumph: True Stories of Redemption from Drugs, Gangs, and Prison” by Alisha M. Rosas. This book features the moving stories of five homeboys from my old neighborhood gang, and how they overcame the odds to be clean and sober, and one “rival” gang member (I no longer have “enemies” among any of them). Includes photos. A powerful testament to personal change and transformation, changing the narrative that people on drugs, in gangs, or in prison can’t change.

And Tia Chucha Press is also proud to announce “Counting Time Like People Count Stars: Poems by the Girls of Our Little Roses, San Pedro Sula, Honduras,” edited by Spencer Reece. Our Little Roses is the only home for abandoned children in Honduras, founded and run by US teacher Diana Frade and her husband, Leo Frade, an Episcopal Bishop. Reece, an American Episcopal priest and poet, now based in Spain, began teaching poetry to girls from the home and put together this wonderful book, which includes marvelous essays by writers who have also taught there. Trini and I were two of the poets who traveled to San Pedro Sula, then the most violent city in the world, and taught poetry to the girls and at a coed bilingual school for a month last year. Amazing photos by Mary Jane Zapp.

In the spring of 2018, we will present “A South Side Girl’s Guide to Love and Sex,” poetry by Mayda Del Valle, famed “Def Poetry Jam” performer and so much more.

I want to leave you with great news: Tia Chucha’s Centro Cultural & Bookstore, the nonprofit arts & literacy, cultural space my wife Trini and I helped create, is now celebrating 16 years of providing arts, writing, music, dance, theater, and more workshops, indigenous cosmology, an art gallery, a bookstore, a performance space, a weekly Open Mic, and more to around 15,000 people a year in the Northeast San Fernando Valley. We’ve raised more than a million-and-a-half dollars in donations from the community, but also support from friends like Bruce Springsteen, John Densmore of the Doors, Cheech Marin, Lou Adler, and others in the music and film industry, as well as grants, earned income from our bookstore and press (Tia Chucha Press). Now we have our biggest grant yet—$300,000 over two years from the Art for Justice Fund that is geared to change the narrative and reality of mass incarceration. This begins in April of 2018. We have tons of planning to do. The project will entail workshops, presentations, film, books, and more. The title is “From Trauma to Transformation” and addresses those people behind bars (through my work with the Alliance for California Traditional Arts), formerly incarcerated (which we have some here at Tia Chucha’s, including Ramiro, but also with other organizations), and to stop the “School to Prison Pipeline” with students and youth (tied to our youth empowerment group, The Young Warriors, where Ramiro is a mentor). We want to replace this with pipelines to healing, growth, authenticity, and empowerment. Our aim is to address all prisons, seen and unseen, behind actual bars and those in our communities, which serve like gateways to these, such as poverty, trauma, addictions, diminishment, and more. All through the arts.

More on this later as we begin to make it happen. Here’s an article about this important fund:

Please consider donating to Tia Chucha’s to match this important fund that should be transformative at all kinds of levels. Go to https://tiachuchas.nationbuilder.com/donate.

All Tia Chucha Press books can be obtained at this link.