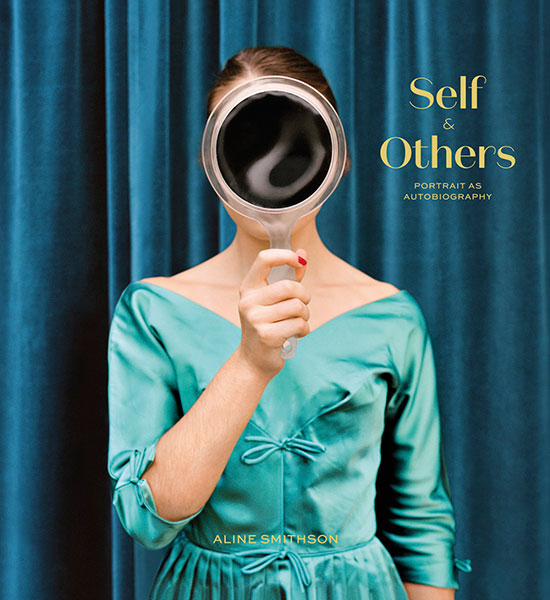 Self & Others: Portrait as Autobiography by Aline Smithson
Hardcover, The Magenta Foundation, 2015
Available at Amazon.com and BarnesandNoble.com
Excerpted Foreword below Acrostic Interview

Book description
Created over an almost 20-year span and drawing from 18 bodies of work, this is the first published monograph of Aline Smithson’s work and features her defining series Arrangement in Green and Black: Portrait of the Photographer’s Mother. From black-and-white to hand-painted photographs, this collection of portraits combines humor and family to create a universal expression of motherhood, to capture the essence of childhood, and to examine created realities, the poignancy of childhood, and the pathos of aging and relationships. She brings a background in painting and fashion to her images, but at the heart of her work is her ability to recognize the inner self of her subjects. The photographer considers all her portraits as a reflection of herself and the stories she wants to tell and in this way she has created a visual language that is her own unique autobiography.

About the Author:
Aline Smithson is a photographer and teacher who curates for the Los Angeles Center of Photography. She has received the Griffin Museum of Photography Rising Star Award for her contributions to the photographic community. Her work has been selected for Critical Mass Top 50, PDN Photo Annual, and Review Santa Fe. She lives in Los Angeles, California.

Room: Where in your home do you work? If not in your home, where do you feel most compelled to create?
I make almost all of my photographs close to home, with the exception of a few series. I shoot against my garage and throughout my house. I have a pink office where I surround myself with inspiration. But most of my creativity comes from inside my head, not in a room, pulled from a deep well of influences.

Tools: What do you prefer to work with, physically and otherwise?
80% of all my photographs are made with a 1960’s twin lens Rolleiflex. For a few series, I use a Hasselblad or a toy camera. I find that my Rolleiflex has a soul and also harbors magic. I still only shoot with film.

Self & Others: Portrait as Autobiography by Aline Smithson

Foreword
When I think about portraiture, I believe we all start taking mental portraits from infancy. I can picture my mother in a belted, pink cotton dress with white rickrack trim, her hair pulled back with curled bangs as she stood at the edge of my crib; I can vaguely make out our overweight German housekeeper named Donnie, wearing a loose stained shift that hung over her braless barrel chest, her hands stinking of chlorine; I can see my father, always in a good mood, packing the back of the family station wagon, layering the suitcases and sleeping bags into a perfect puzzle that allowed just enough room at the top for a travel day bed. I remember my best friend’s mother, Rosemary, running her hands across the Danish Modern dining table, feeling the texture of the wood as she served up her habitual tuna noodle casserole. Or sitting with my sister on a hard wooden church pew watching my grandfather preach to the masses, taking in his deep and resonating timbre as we waited patiently for the grape juice and crackers, a little bit afraid of who he was. These are the portraits that I never captured on film, unremarkable to the rest of the world, but part of the scrapbook of who I am. Little did I know it was the beginning of a lifetime desire to look at people with curiosity and great interest.

I studied art in college, focusing on large conceptual abstract oil paintings inspired by Rothko and Diebenkorn, but the one regret that I had as an artist was that I couldn’t paint a meaningful portrait.  My work was more about color, form, and visual connections and less about capturing the physical self. I made a few attempts at portraiture using photographs projected onto canvas, but I felt like I was cheating and gave up on the idea.

Growing up, my visual stew of influences were seasoned by a variety of ingredients. I spent hours as a young adult, lying on the living room rug, examining album covers in hopes of illuminating the meaning of the music I was listening to. In love with a number of musicians, I read the liner notes over and over as if to find some secret message meant only for me. I combed the artwork and photographs that were used to describe an offering of 12 songs. I remember one album cover in particular that changed the way I looked at a photograph: Boz Skagg’s Silk Degrees. Boz was dressed in a black suit and sunglasses, sitting sideways on a gray green bench. A brilliant aqua ocean spread out in front of him as a candy apple red manicured hand edged into the frame behind his back. I was more than intrigued. That one image was a powerful metaphor and set the tone for what was inside the sleeve. Without knowing it, the idea of a single image telling a story, whether it be an album cover, book jacket or accompanying a short story, began to seep into my consciousness. And it also began my love for the square image.

Like every other teenage girl, I devoured fashion magazines at record speed and became a Vogue Magazine devotee by the age of 12. I loved a photograph’s ability to transform, inspire, and create stories that made me want to wear those fall wool plaid ensembles as I sweltered in the Southern California summer heat. Those photographs made me desire to be part of a perfectly coiffed world: they inspired me to wear false eyelashes and white lipstick as a nerdy 13-year-old, telling myself it was all in the attitude. Those photographs made me feel chic.

Other influences certainly seep into my work. Growing up in California, the quality of light is so important to how I see.  I lived in a neighborhood that was filled with Mid Century masterpieces by Richard Neutra, R. M. Schindler, Gregory Ain, John Lautner and Frank Lloyd Wright. Many afternoon walks with my friends in middle and high school were spent picking out the various Eames-filled homes, placing value on quality design at an early age. Needless to say, I married an architect.

I attended the College of Creative Studies, a school within the University of California at Santa Barbara. As an art student, my visual palette was influenced by California painters such as Ed Ruscha, John Baldessari, John Altoon, Billy Al Bengston and Ed Moses. Some favorites were and are, Richard Deibenkorn, Wayne Theibau, and David Hockney for transporting color and light in a way that feels almost edible. I was most influenced by Rothko for his color, Duchamp for his intelligence and humor and finally, James McNeil Whistler for his range of work that resonates so completely with my sensibilities. From his remarkable Arrangements to his exquisite Nocturnes, Whistler embodies an artist whose work moves seamlessly into new subject matter. 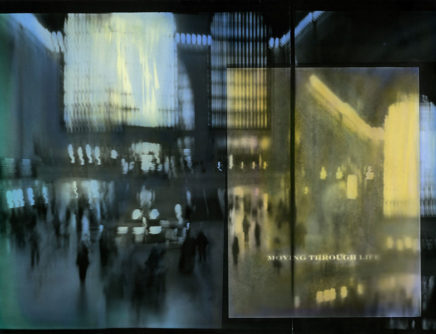 I moved to New York right out of college, in hopes of becoming a significant painter. But life had other plans for me. After a year of working as a gallerista, I was offered a job in the fashion industry and shifted gears. For the next decade, I worked as the fashion editor for Vogue Patterns and Vogue Knitting magazines and was responsible for producing 19 issues per year. It was an incredibly creative job and required me to concept story ideas, select designs and fabrics, work with dressmakers, guide the accessory editors, hire the models and hair and make up artists and show up at the shoot with ample ideas and a good attitude. It was a job that I was totally unprepared for, but one that I loved so much. I was completely enamored with fashion photography—my office was covered in pages torn out of magazines by photographers like Guy Bourdin, Helmet Newton and Paolo Roversi. On shoots, I absorbed the way photographers ran their studios, how they treated their assistants and which creative solutions they came up with for clothes that were sometimes less than exciting. Two photographers were my favorites to work with—the first being Mario Testino for his positive and joyous nature. For him, nothing was impossible and he was generous and wonderful to be around, but also was so incredibly talented.  Patrick Demarchelier surrounded himself with only the best assistants—an important part of being successful—and he had the ability to make anyone look spectacular. He was a man of few words, but he truly couldn’t take a bad picture. Had I known that I too would become a photographer, I would have paid closer attention to the lighting and the technical side of things, but I was too busy pinning safety pins to improve the fit of a dress or steaming a finicky silk blouse.

After a move to California and the birth of our daughter, Charlotte, I continued to photograph life in ordinary ways.  Stacks of drugstore-printed photographs captured birthday parties and vacations; I photographed holiday smiles and celebrated the birth of my son, Henry. Motherhood meant navigating new waters—where I found myself at a turning point, frustrated by my lack creative expression, coming to terms with a tethered life with small children afoot.

I was still painting in the mid 1990’s when I picked up a camera as a way of creating art. Over the years, I had documented my life photographically without considering myself a photographer: I wasn’t shooting with intention. I took a photography class to learn how to make better photographs and in the midst of it, discovered a suitcase of cameras belonging to my father and uncle in our garage. That discovery was the moment that everything changed. With Rolleiflex in hand, I began to see anew. I was fascinated by witnessing humanity through a medium format lens, capturing moments and gestures that could translate into a form of storytelling. I felt like I had finally found my artistic path that enabled me to fold in film stills and storytelling and color and noir and humor and family and the pathos of simply being human. Photography felt like a perfect fit and I wondered why I hadn’t realized it earlier—my father and uncle had been photographers, we had a darkroom in our basement, I spent years surrounded by photographers, and yet never considered it my path.

So now, those non-photographed portraits of my childhood were being captured on film, like split-second memories edited into an artistic narration of the world around me. But, at the end of the day, I still make portraits without my camera, in fact, my mind photographed one today, of my waitress at a mountaintop coffee shop. The lunch rush was over, so she strapped on what looked like a canister jetpack capable of launching her into outer space, and began vacuuming the soiled patterned rug that should have been replaced long ago.

Get caught up with Aline Smithson stories and art

REVIEW: Aline Smithson’s advice is to take chances, embrace fear, be kind, grateful, and give back…